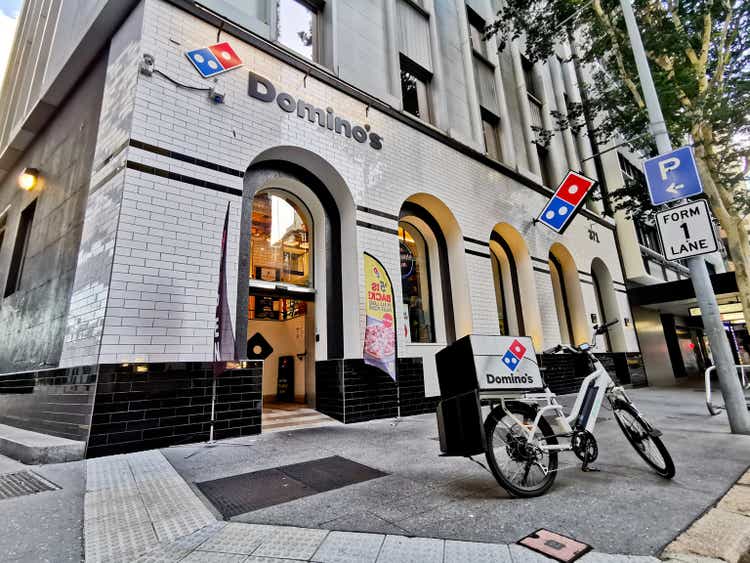 Dominoes (NYSE: DPZ) was founded in 1960 by Tom Monaghan. The company’s differentiated operating model has been widely successful in recent years, significantly outperforming peers such as Pizza Hut and Papa John’s.

unlike most pizza chains, Domino’s does not offer on-site catering. Currently, 57% of sales come from delivery while 43% come from delivery. This allows the business to be more agile and have smaller stores, which reduces costs and expenses. With lower costs, it is then able to offer pizzas at attractive prices, significantly overvaluing its competitors. It also works with a digital-first approach. More than 75% of its sales are made through digital channels, with more than 29 million active users worldwide. These factors combined have made Domino’s one of the most popular pizza brands in the world.

Domino’s has been one of the best pickers of the past decade. Shares of the company rose more than 970% during the period, compared to just 176% for the S&P. Amid the market sell-off, Domino’s had crashed and is now down nearly 35% from its all-time high a year ago. Despite the steep drop, I think investors shouldn’t jump right in. The company’s sales growth has slowed significantly and EPS has declined, the latest results show. It faces strong headwinds from inflation, supply chain and negative currency impact. The current valuation is also very stretched against its peers, signaling a potential multiple contraction. Therefore, I rate Domino’s as a sale at the current price.

Domino’s released its second quarter results in July and the results are very disappointing. The growth rate continues to slow while the bottom line deteriorates significantly. The company reported global retail sales growth of 1.5%, compared to 17.1% growth the previous year. US same-store sales decreased 2.9%, while international same-store sales decreased 2.2%. The decline is offset by growth in the number of stores, with the company opening 233 new stores globally in the quarter.

Our results for the quarter faced challenges similar to those I described in April. We continued to navigate a challenging labor market, particularly for delivery drivers, in addition to inflationary pressures combined with COVID and the stimulus-fueled sales plans of the previous two years in the United States.

Total revenue for the quarter was $1.06 billion, up 3.2% year-on-year (year-over-year) from $1.03 billion . The increase is largely due to higher consumer basket prices in stores, which rose 15.2% year-on-year as inflation continues to take hold. The company recorded revenue of $5.9 million due to the negative impact of changes in exchange rates, caused by the strong dollar. Revenue growth this quarter is well below the company’s historical average, as shown in the chart below.

Domino’s has very shareholder friendly policies. It regularly returned money to investors in the form of dividends and redemptions. I think the company will continue to do so, which will provide some support for the stock price. The company has significantly increased its dividend over the past few years, recording a 5-year dividend growth rate of 19.4%. In the chart below, you can see that the quarterly dividend continues to rise steadily. Despite the strong increase in dividends, the payout ratio remains very healthy at around 31%.

The company also actively reduced the number of its shares. As shown in the second chart below, the number of shares outstanding continues to decline over the years, down almost 50% since 2005. In the last quarter, it repurchased $50 million worth of shares and has a remaining authorized amount of $606.4 million for further share repurchases. I think buybacks will continue to help boost its EPS figure going forward.

Despite the huge drop in share price, Domino’s valuation remained expensive compared to other restaurant companies. In the chart below, you can see that the current P/E ratio for Domino’s is around 28.6. While peers such as Restaurant Brands (QSR), Starbucks (SBUX), Yum! Brands (YUM), Darden (DRI) and Chipotle (CMG) mostly have P/E ratios in the 20s, with Chipotle being the only outlier at 64x P/E.

The premium has been justified for Domino’s in the past, as it is able to post industry-leading sales and EPS growth. However, revenue growth has continued to decline over the past year, currently standing at 3.2%. This figure is significantly lower than the five-year average of 12.2%. EPS and cash flow figures also saw a sharp decline in the quarter, as mentioned above. In the second graph below, you can see that all metrics at all levels are significantly behind their past averages. Given the company’s recent poor financial results, the bonus should not be justified. I think it would be more appropriate for Domino’s to trade at a similar multiple to its peers.

Much of Domino’s growth thesis is based on its international growth. The company outlined its plan to potentially increase its number of stores from 5,084 to 8,475 in developed markets and from 3,774 to 11,375 in emerging markets. However, I believe there are underlying risks in the expansion. While Domino’s is a household name in the United States, the company’s brand recognition is significantly lower in the rest of the world, especially in emerging markets. It also faces much stronger competition from local brands that are building more customer loyalty. Recently the company decided to exit the Italian market after seven years as it failed to generate positive traction.

While in emerging markets such as China and India, the company fails to gain a price advantage as local brands are often even cheaper. The recent surge in the dollar is also likely to pose strong headwinds to its international expansion, particularly in the Europe region. As mentioned above, the company has already recorded $5.9 million in revenue due to the negative currency impact and expects another hit of $20 million and more throughout of the year. Another potential risk is a further deterioration in the macroeconomic environment. High inflation and supply chain disruption led to increased operating costs and expenses for Domino’s. As prices rise, consumers are also more inclined to cook at home in order to save money. If inflationary and supply chain pressure persists, the company’s financial performance is likely to be further impacted.

On the other hand, if inflation were to decline faster than expected and the supply chain disruption subsides, Domino’s could see an upside surprise. As real interest rates fall due to lower inflation rates, the dollar is also expected to follow (the chart below shows the recent correlation between real rates and the dollar index). This will in turn reduce the foreign exchange impact, reduce costs and increase revenue figures. The company also actively launched new products and implemented cost reduction efforts. Although I think it is difficult to suddenly reverse the situation, a success will improve the financial figures considerably.

In conclusion, I think investors should stay away from Domino’s for now despite the sharp decline in the share price. The company’s financial performance in the last quarter indicates a sharp decline in sales growth, well below its historical average. EPS and operating cash flow also fell sharply. While the company’s active share buybacks are providing some support for the EPS figure, they are unlikely to offset increased costs and expenses.

The company’s international growth plan may face unprecedented risks as it lacks brand and price advantages in foreign countries. It faces a huge currency headwind as the dollar continues to remain very strong. Inflation and supply chain uncertainty could also put further pressure on the company. Even after the share price plunge, the current valuation remains expensive relative to its peers. Given the macro backdrop and slowing growth, I think a multiple contraction towards peer levels is very likely. Therefore, I view Domino’s as a sell and will return once the fundamentals start to improve.

Oil and gas companies will be hit hardest by the Cut Inflation Act, Moody’s says

Chalice files application to cease to be a reporting issuer