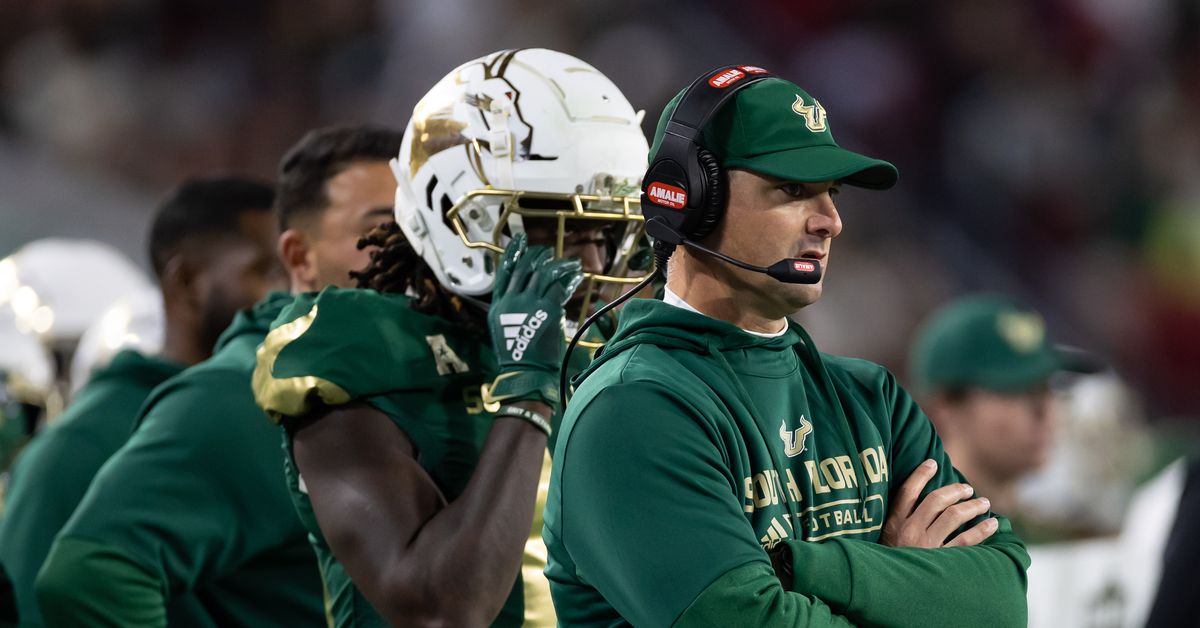 Many thanks to the folks at the Daily Stampede for answering my questions in about 20 minutes on a Saturday. If you haven’t read our A-ing of the Q’s of TDS, it’s the low.

Florida fans last saw USF in the game in which Anthony Richardson cemented his status at less Florida’s greatest QB of all time, who also doubled up in one Emory Jones couldn’t quite achieve the same trailing speed in. With Richardson now as Florida’s starter, is USF susceptible to the same type of Supermanning?

Oh my god yes. Howard was able to slash USF to the ground early in the game last week, and we’ve all seen what BYU did in Week 1. There’s no reason (or movie) to believe that USF will be able to contain Richardson.

USF came a long way to respectability after the bottom collapsed at the end of Charlie Strong’s term. Is Jeff Scott’s rebuilding continuing at the pace he needs to keep his job, and does it matter if he can’t keep the Bulls close as three-TD underdogs?

In FBS games under Jeff Scott (20 overall), USF trailed by two or more scores after the first quarter 10 times. It’s the tendency of Scott’s teams to get off to a slow start. He recruited pretty well, got donors to spend money on vital things (OCS, IPF, etc.). It is on the pitch that he continues to lag. The jury is still out on whether he is The Guy.

USF’s precarious status as an AAC team that has arguably – especially by UCF fans – been skipped over in the conference expansion and reshuffle race seems from the outside like the hallmark determinant of USF fandom right now. Is there any truth to that assessment, and are there specific things the average USF fan wants the program or school to do in the short term?

It is an accurate assessment. USF had an eight-year head start in a P5 conference over C. Florida and squandered it, one rash decision after another. Now they are catching up during the most volatile time in college athletics.

I believe that the right leadership is in place at the university to make things happen, and that hasn’t been the case for a long time.

Your friend and ours Seth Varnadore – we’ll join him in a moment – Noted that USF has important playmakers at wide receiver and on special teams. Could they trouble Florida in these phases of play? Would USF have a better chance in a tight, low-scoring game or a tense touchdown fiesta?

If it’s a low score match, we count that as a win, regardless of the actual result. We’re in real serious “I’ll believe it when I see it” territory with this team.

Jimmy Horn and All-American Brian Battie are dangerous with the ball in their hands. Horn hosted a kickoff return in Week 1; Battie picked up three last season and added a 60-yard touchdown run last week. Still, if he gets points, it won’t favor USF.

Finally, I’m just going to steal your last question: we both share custody of Seth Varnadore. So what is your favorite thing about him?

It brings legitimacy to the football coverage on the site that was missing. He played high school football and college football; he coached football in high school and college. The amount of knowledge that oozes from him just in passing is enough to make your head spin. Plus, her hair is amazing.

Seapeak preferred shares are still attractive with yields of 8.4-8.9% (NYSE:SEAL.PA)

Variable number of problems detected during audits in the vicinity