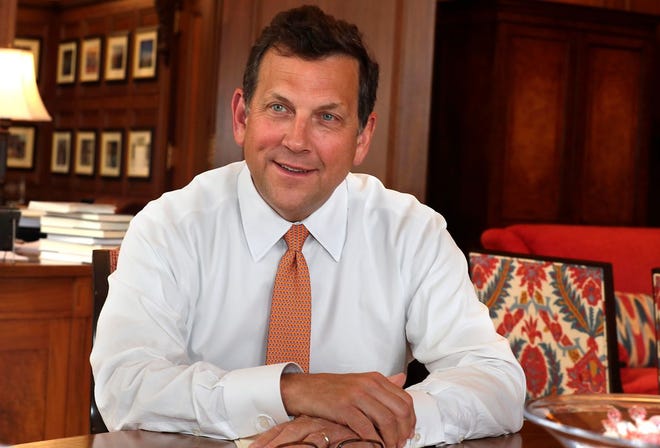 It wasn’t that long ago that Kmart was one of the leading department store chains in the United States, operating nearly 2,500 stores at its peak. But its domination of the market has not ensured customer loyalty, nor the survival of Kmart.

New competitors offering customers a better product have overtaken Kmart. Then, rather than adapting to a new landscape, Kmart resisted change – and through a combination of mismanagement and inferior product and service experience, drove customers away, resulting in deteriorating finances, bankruptcy and uselessness. Retail customers have abandoned Kmart for better alternatives.

RELATED:From technology to training to therapy, MPS is finalizing its plan to spend $ 500 million in stimulus funds. But has he received enough feedback from the family?

At the same time, parents have chosen different and better options, causing enrollment in traditional MPS schools to drop from about 87,000 students in 2007 to 61,431 today. Enrollment fell by 3,000 students last year – and instead of recovering from those “pandemic” departures, MPS has lost an additional 4,000 students this year.

This is happening because families in Milwaukee have a choice – much like retail shoppers who choose Walmart over Kmart – giving them the ability to choose where their children go to school with the support of public funding. This is particularly stimulating for low-income families who would otherwise not have that choice.

A seismic shift in the Milwaukee educational landscape

Over the past 25 years, because city parents have used their ability to choose a school that best meets the needs of their children, there has been a dramatic shift in the schools attended by students from kindergarten to the 12th grade. For publicly supported students, MPS now educates only 55% of the K-12 population, whereas 25 years ago it was almost 100%. The rest attend Milwaukee Parental Choice Program schools (26%), independent chartered public schools (14%), and out-of-town public schools (5%).

Just as Kmart shoppers fled Kmart for better retailers, parents and students in Milwaukee fled MPS for better run schools that meet the needs of their children.

While parents have found good schools in MPS, Milwaukee’s Private and Parental Choice Program charter schools demonstrate an overall higher standard of quality, as measured by the state’s Department of Public Education. Looking at the top two DPI scores for schools (‘significantly exceeding’ or ‘exceeding expectations’), we see that this covers schools serving 77% of students attending a public charter school and 59% of students. attending an MPCP school.

Among MPS students, only 21% are in a highly rated school. This is despite the fact that the MPCP and independent charter schools receive between $ 4,000 and $ 7,500 less in public funding per student. All signs point to a further decline in enrollment and a stagnation of quality schools within MPS.

What does this mean for MPS?

Fewer families choosing to send their children to MPS are reducing the per student funding (based on enrollment numbers) allocated to MPS in the form of state and federal aid. This means that MPS’s tax-raising power, the share of funding from local property taxes that is less sensitive to student enrollment, needs to increase. In real dollars, MPS collected $ 3,502 per student in 2007, and if enrollment does not decline further, MPS will collect $ 4,303 per student in 2021.

In addition, the recent MPS referendum to add a permanent increase of $ 87 million to local property taxes is an effort to counter this drop due to declining student numbers. This increase in property tax is unrelated to registration. Worse yet, MPS went so far as to note that none of the $ 87 million would be spent on students at MPS charter schools. So, if you are a parent with a child at an MPS charter school, you must pay the property tax increase, knowing that the funding will not benefit your child.

This budgetary maneuver is a short-term stopgap for the long-term reality that fewer parents choose MPS schools as the place to educate their children. Residents of the city of Milwaukee pay more taxes to educate fewer students and perform poorly. A financial disaster is looming.

At this point, MPS projects a budget deficit of $ 52 million by 2024. Factors include rising payrolls, legacy costs, and restoring funding for retiree health care. The drop in enrollment also highlighted the district’s failure to execute a facilities plan. Fewer students should reduce the need for physical space and seating, but instead, MPS failed to properly size its space, leading to the cost of excess capacity.

According to a study of MPS facilities, the district had a capacity of 12,000 more students than it was currently enrolled in 2018 and that excess capacity is expected to reach 23% by 2027. And these gaps are magnified because many students who start high school at MPS don’t make it to their final year. Enrollment numbers for senior MPS as a percentage of their freshman cohort had not exceeded 55% until 2015, and the latest data shows that the 2018 freshman class of 6,414 has fallen to a cohort of 4,066 people.

Without change, MPS is doomed to failure

In the short term, MPS plays a role play with the facilities by moving students to fill underused school buildings. In the long run, the district makes sub-optimal decisions about how to best use school buildings to serve students and taxpayers, which further drains resources that might otherwise be spent on student education.

If it continues to function that way, MPS is doomed to failure, as is Kmart.

The status quo – doing the same things over and over and expecting different results – will not only doom MPS, but subject another generation of students to a below average education in our community.

However, unlike the retail industry where Kmart shoppers might choose to go elsewhere as the experience worsens, too many students and families in Milwaukee have no choice – they are stranded. at the MPS. There are simply not enough quality places due to limits on the growth of choice and charter schools.

Now defenders of the status quo will claim that if we look at other urban school districts in other cities, the MPS is not that bad. But it’s like Kmart claims it’s better than Sears. Both went bankrupt.

Or advocates will say that if they only had more money, MPS would perform as well as private and charter schools. It’s like Kmart is raising its prices to compete with Walmart. It’s also important to note that giving parents the choice of where to send their child hasn’t resulted in poor MPS results – academic gaps have been a problem for decades.

It’s simple, too little has changed at MPS. Northwestern Mutual, like many businesses in this city, remains frustrated with the lack of progress perpetuated by MPS and its leaders. Our business needs and wants employees who grew up here – and we’re the city’s biggest property taxpayer. We have also chosen to provide significant support for education in our community, donating $ 50 million over 25 years, including support to MPS schools and the families who send their children there.

Turning your back on the MPS is not the answer, nor sitting quietly on the sidelines and hoping for a better result. Preparing all students to reach their potential is an indelible mark of a successful community. This city and region will continue to fall short of that mark, if MPS continues to ignore the permanence of parent choice and the growth of quality school options outside the district while perpetuating a status quo response. If the status quo continues, no one should be surprised when MPS veers off the fiscal cliff it is rushing towards.

In my opinion, the ONLY thing that will save MPS and these children is a complete transformation of the system starting with board governance, going through every school and extending to every leadership position.

We now have a competitive election campaign on the horizon. This election gives us the opportunity to select a leader committed to the kind of disruptive transformation that is the only way forward for MPS and tens of thousands of children, most of whom are people of color.

I publicly knock on this door because time is running out for our children. A conclusion of a report commissioned by Gov. Jim Doyle and Milwaukee Mayor Tom Barrett in 2009, titled “Towards a Stronger MPS,” might as well stand today:

“The sad reality is that academic performance across MPS remains unacceptably low.”

Let’s not waste another 12 years. Our children deserve something better, not another Kmart.

John E. Schlifske is President, President and CEO of Northwestern Mutual and Past President of Milwaukee Succeeds.

Herdez Group. of (BMV: HERDEZ) could be a buy for its next dividend

Too much money can be a problem. Why Palantir Technologies (NYSE: PLTR) Might Want to Reinvest More in Future Growth