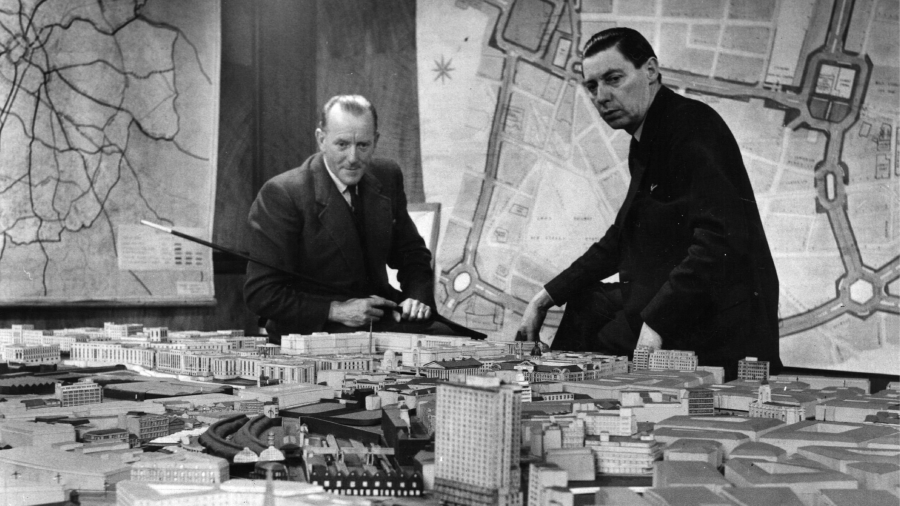 “We are in the heart of the West Midlands,” said the voice, its heavy New York accent reassuring and familiar. “Taking the express elevator to the top of one of the tallest buildings in the city, it was the view that almost took my breath away. . .” The camera pans across a sun-drenched 1970s cityscape. Factories, high-rise buildings and busy roads. “I found the city fascinating. . . You feel like you’ve stepped into the 21st century. And then the clincher: “Yes, [Birmingham] is my kind of town.

The voice belongs to American film star Telly Savalas, and these quotes are taken from his commentary on the 1981 documentary Telly Savalas watches Birmingham. Unfortunately, it was all told in a dubbing studio somewhere in Soho; Savalas never set foot in the city. He narrated equally silly films about Aberdeen and Portsmouth – probably on the same day – but it’s his anthem to the UK’s second city that stands out. Perhaps it’s because the Brummies themselves, with their self-deprecating humor, are so deeply attuned to the gap between the realities of Birmingham and Savalas’ attempt to portray the city as a cross between Detroit and Fritz. Lang. Metropolis.

And yet, was his comparison so far from the truth? Post-war Birmingham was always designed to function as an American automobile city. We are reminded of the fact in this captivating book by Richard Vinen, originally from Birmingham, who is now Professor of History at King’s College London.

The first chapters of second city date back to the 11th century, but the vast majority of the book is devoted to the last 150 years of Birmingham’s history, taking us back to the present day while pausing before the city’s recent hosting of the Commonwealth Games. Vinen reminds us that the roll call of the people behind Birmingham’s claim to ‘second city’ status – not just in terms of population but cultural, political and economic clout – includes Herbert Manzoni, the chief engineer of the city in the post-war years.

“Making Birmingham a motor city,” Vinen writes, “was a conscious imitation of America. In 1955, Manzoni said, “I see no reason why the traffic in this country should not attain the proportions of the traffic in America”. ‘Spaghetti Junction’ intersection in the early 1970s. The result is that today, as we finally wake up to the disastrous environmental consequences of our car addiction, Birmingham faces an identity crisis and urban design with an acumen unique among major British cities.

Its fortune has been linked to the automobile industry since Herbert Austin opened Austin’s factory in Longbridge, on the outskirts of the city, at the turn of the 20th century. A factory that employed only 50 people in 1906 had expanded by the late 1960s to employ more than 25,000 workers. Yet by the 1970s it had come to symbolize the decline of British manufacturing. Vinen recounts the wave of unofficial strikes during this period, and the depiction of British Leyland (as Austin’s now nationalized firm became known) in the press as a hotbed of militant unionism – one which Margaret Thatcher was determined to subdue when she became prime minister. in 1979.

It presents an unassuming face to the world, which belies its historic status as an industrial powerhouse and pioneer of multiculturalism.

It’s an oft-told story, but Vinen finds new layers of nuance in his portrayals of the main players – union stewards Dick Etheridge and Derek Robinson, and Leyland chairman Michael Edwardes – where union men have too often been seen simply as communist troublemakers and Edwardes as a Thatcherite stooge.

It is telling that Birmingham’s main opposition to Thatcherism was concentrated at the Longbridge factory, as the politics of the city as a whole have always been difficult to define. In 2016, Birmingham voted to leave the EU with the narrowest of margins (50.4%). None of the main parties ever really predominated there, and as Vinen demonstrates, Joseph Chamberlain, the spirit president of Birmingham politics and short-lived mayor of the city between 1873 and 1876, was an ambiguous figure, achieving a path from radical liberal to conservative unionist.

What cannot be denied is the extent to which Chamberlain improved life in the city during his brief tenure as mayor, bringing gas and sewage under municipal control and transforming central urban space. Whether Liberal or Conservative, he upheld a belief in a benign, paternalistic form of capitalism that matched the vision of another of Birmingham’s most famous families – the Cadburys – of whom the Bournville chocolate factory was a practical model. of this philosophy before it was taken over by Kraft Foods in 2010.

The history of race relations in Birmingham is not always pleasant to read: Vinen describes it as “a cauldron of racial hostility” in the 1960s but ends his account on a more celebratory note, hailing it as a “city of migrants” in which the relations between different ethnic groups are marked by “a deliberate and playful hybridity”. On the cultural life of Birmingham, he writes extensively about pop music, but otherwise his coverage is spotty. The cover promises a book “about characters everyone has heard of, from JRR Tolkien to Duran Duran”, but Tolkien is only mentioned once, and no reference is made to the work of other personalities. important Birmingham cultural figures such as Tony Hancock, Jim Crace or David Edgard.

Perhaps that’s why Vinen never gets to grips with the city’s elusiveness. Straddling England’s north-south divide, it presents a modest face to the world that belies its historic status as an industrial powerhouse and pioneer of multiculturalism.

The understatement is one of the defining characteristics of the city, and in the end Vinen gets over it himself, concluding that “the ordinary. . . confers its own importance. There’s unlikely to be a more complete or informative history of Birmingham than Vinen’s, but sometimes we want to know a little more about why, exactly, this wealthy, complicated and frustrating city is “his kind of town. “.